We've reached the end of the second coding period.

In this post, I'm going to tell you about my progresses grouping the notifications.

By discussing with my mentor how could the best approach be, I found out that the notifications were already grouped on the code level, but these groups were not being represented in the UI.

In the code, there's a class named Source, which is responsible for the group. It handles the info's about the app that have sent us any notification and store them.

There's also a class named Notification, that creates a single notification, with title, banner, and has optional parameters such as playing sounds etc.

Each Source has an array property that contains its notification objects, which gives us the groups.

We needed a way to display these groups in the UI. The way the notification messages(a message is a representation of a notification - the bubble we have in the UI) were being created and displayed in Shell until now, was by an iteration of the existing sources, and we had something like:

The process of building a notification message could be represented in a simplistic way as: 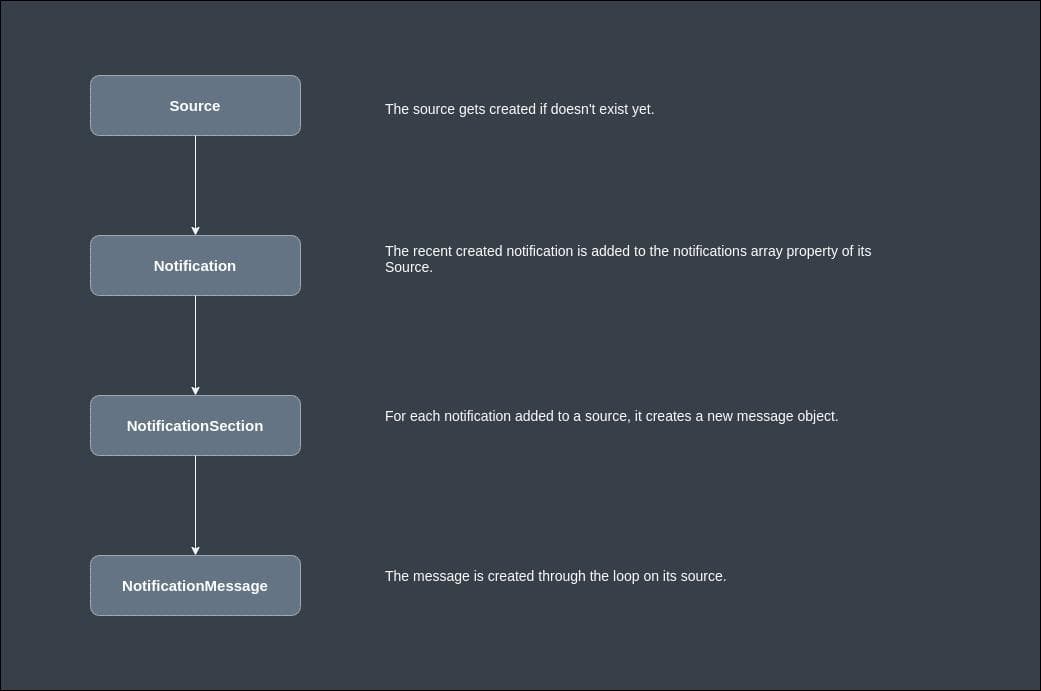 The new SourceSection class represents this new level between NotificationMessage and NotificationSection. It was created to, as its name says, represent the group that would handle its own notifications, not depending on the generic listing class to create the messages anymore.

The SourceSection also extends the MessageListSection because we also need to list the groups somehow, and with this approach, we could reuse the existing code.

Now that we have the groups represented in the code level, we need to display them as groups on the UI as well.

In the mockups, there are two possible states for a group:

To achieve something like this, we had to create a custom layout manager, that would be responsible for these two distinct behaviors.

This layout manager, called SourceMessageLayout, extends the Clutter'sBoxLayout class, which the MessageListSection uses to create the list, and we can replace the layout manager only of the SourceSection class, without affect the inherited methods at all.

Curious to see how these solutions fit together?

Please keep in mind that this is still a development in progress, and this is not the final solution yet.

It's so satisfying to see the project growing and the pieces fitting!

However, there's a lot to improve the solution, and those are my next steps to finish the project:

Lastly, I'd like to talk about GUADEC which this year was completely remote.

This was my first talk at a conference, in a language that I'm not a native speaker. I want to thank my mentor and the GNOME community for creating a comfortable environment for the interns to talk about their projects.

Below you can check my talk: